At the university of Waikato, Hamilton, New Zealand, students and researchers work in the computer science department. The work is quite similar to other international cs working groups, but yet different. It’s – in a way – an utterly new world for a visitor from Germany. Like me. (Almost) each member of the department comes from a land far, far away. This results in a rich pool of experiences and views. Which is an advantage, for interesting and new ideas can be evolved, but sometimes it’s difficult to handle. The common denominator is the scientific language and the common interest in the projects, e.g. Digital Libraries, Usability or Information Systems.

For my talk, I’ve been sent in a time box (three airplanes and 12 h forward the clock) from winter darkness to summer light. On arriving, I was a little bit confused, but soon I noticed the other world’s rules: there are signs in the university which force people to „wear shoes in this area“; everyone asks how you feel or if you’ve had a good day; bread is compressable to the size of a pea; at the university people have to pay for rooms, equipment and rather slow internet access. 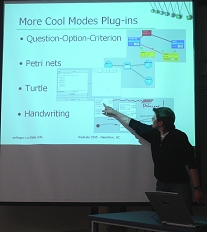 Prepared after some time travelling around the north island, I’ve returned to Hamilton to give my talk "Handling of Metadata in a Collaborative Modelling Environment". And a surprising thing happened: The audience became alive! Which has seldom been seen in the scientific world. Even those who are usually more quiet, asked and explained and were really curious. So we’ve discussed their work and my work and we could see a possible thought of cooperation.

Maybe I will return to the land in deep space to start another project. And so could you, if you’re interested. Don’t hesitate to try! And please feel free to ask Annika, Andrea, Doris or me.